I know, I know. "What the hell, Z? It's only been, like, five months--where the hell have you been?" Sorry to say, real life takes precedence over Slenderblogging, as much as I've been /dying/ to keep watching Marble Hornets. Especially since there are apparently more of them now! And these "EverymanHYBRID" and "TribeTwelve" things I've been hearing about? Well, I suppose I'll just have to wait and see~

It's probably going to take a while longer for me to get back into this. Lots of IRL stress, and I kinda have this...I dunno, a feeling that maybe I /shouldn't/ get back into the videos. Like, not that it'll be a waste of time--just that I really, really shouldn't jump back in. I dunno. Hopefully as soon as I can get past the mental block or whatever, I'll be back on track.

In other news, if the Omega who commented on my last post is still flitting around--does that answer your question? ^^;;;
Posted by Z Wakey at 5:18 PM 7 comments:

AND SO IT BEGINS

Things have been crazy since school started--I haven't had time to watch Marble Hornets at all. Between the overload of homework already and the general inability to sleep and this STUPID COLD THAT WILL NOT GO AWAY AURGH, all I've really wanted to do is curl up into a little ball and die somewhere. Except...notrly, 'cos that would be freaky.

On a random note, anyone know where I could find a copy of House of Leaves? I want to read iiiiiiiiiit.

Sorry for the delay, y'all. Apparently you're not supposed to be on the computer when you're sick. *SIGH*

From what I've read around, Marble Hornets is the first and best Slendystory out there--and from what I've seen so far, it's definitely creepy enough! I like it a lot, but now I can't sit near my windows...I keep expecting to look up and see Slendy lurking around the trees. xDDD 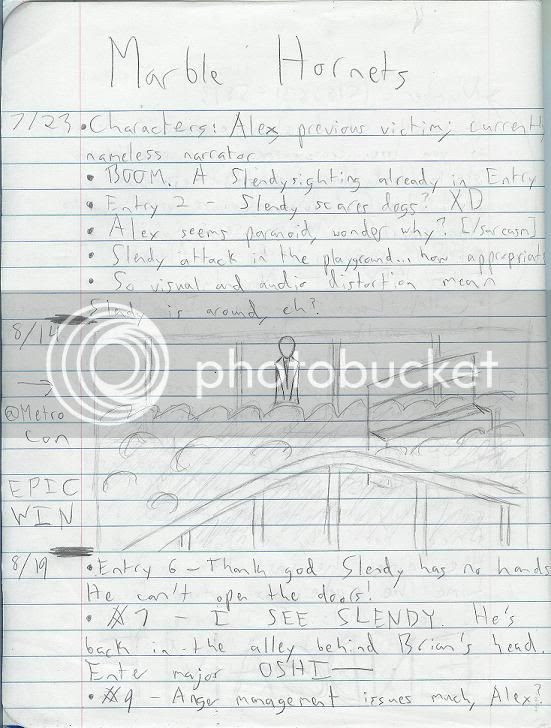 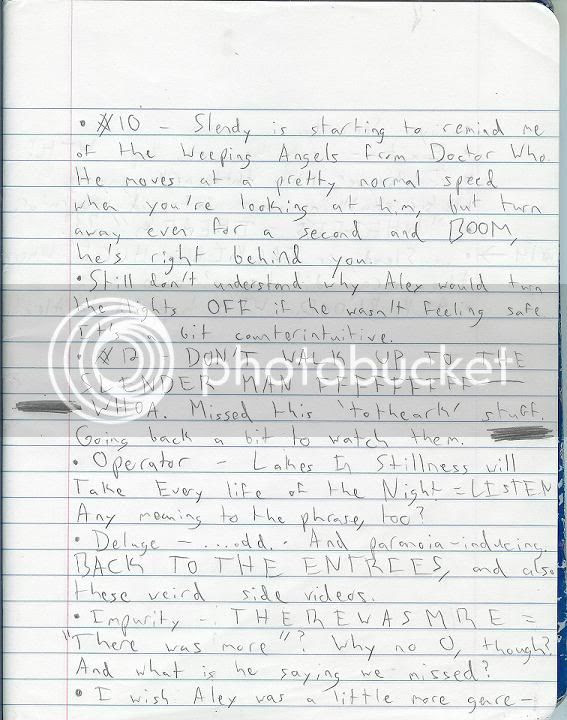 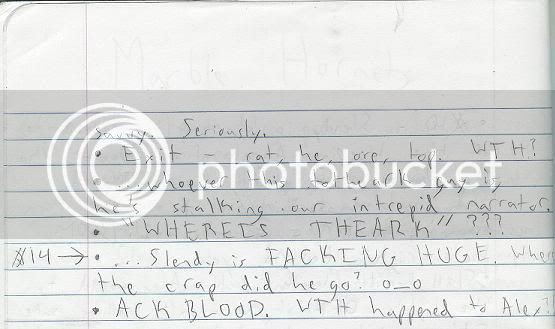 It didn't occur to me to try until I was about halfway through scanning, but I ran those words from the Exit video through the ROT machine and came up with nothing. Then I decided to sit and try to pull out an anagram, 'cos that was the only other thing that made sense--and lo and behold, "rat he ore top" becomes "the operator"! *socool* X3

Stay tuned for the next update~

Updating this from a rented house about eight hours away from home (and my scanner, RAWR). I kinda sorta had another attack of life, which is why I haven't updated this in weeeeeeeeeeks. MetroCon totally fried my brain for a week, then I kinda got temporarily grounded for whining at my dad, THEN we came up here so I could tour a school campus that I'm going to apply to for next year. But I'll be home by Monday--hopefully with an update! X333

ALSO, I figured y'all would be interested in this--there was a Slender Man at MetroCon! Seriously, I could not make this crap up. I was waiting in line for the anime human chess match and BOOM! There he was across the floor, kinda lurking around Artist's Alley. It was an epic costume, too, the dude must've been wearing stilts or something. I'll try to draw the scene in my book. Anyway, so he was just kinda hanging out, and I watched him for a minute...it must've been hard to keep still with all those people jostling around. Then I lost sight of him for a second 'cos this guy in a HUGE costume of Aku from Samurai Jack went past, and he was gone. 8D Props to whoever that guy/girl was~

AURGH. I hate it when I wind up having an attack of life. Then nothing gets donnnnne. Anyway, my final notes on the JAFool blog. X3 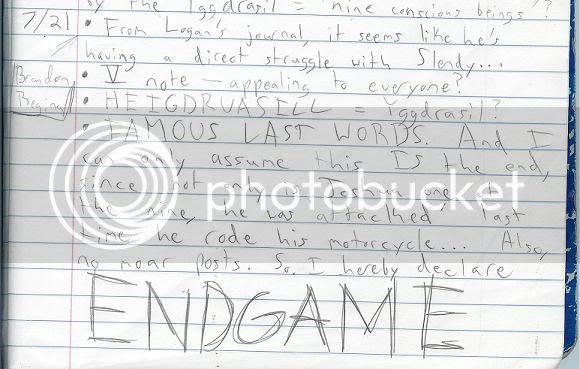 I'm kinda sad that I missed this one. It sounds like it was a lot of fun, for the people who actually cared to play along. X3 Rest in peace, Logan and Josh and Matt and all the others who got attacked and shiz. Now, here's hoping I'm NOT really one of those nine conscious people Logan was all about, or I'd just have to kick Slendy in the FAYCE. And he wouldn't like that much, I'd wager. ;D

NEXT UP: The infamous Marble Hornets~!!!
Posted by Z Wakey at 9:59 AM No comments:

Once again, apologies for the delay! We have some family over, and the scanner was being silly anyway. It's old and crummy, and it doesn't like to work sometimes. Butanyway, here are my notes on the next part of JAFool~ 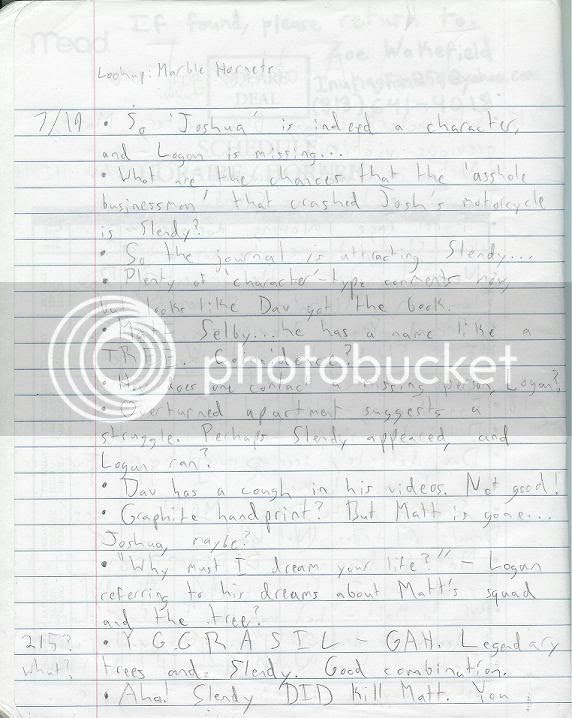 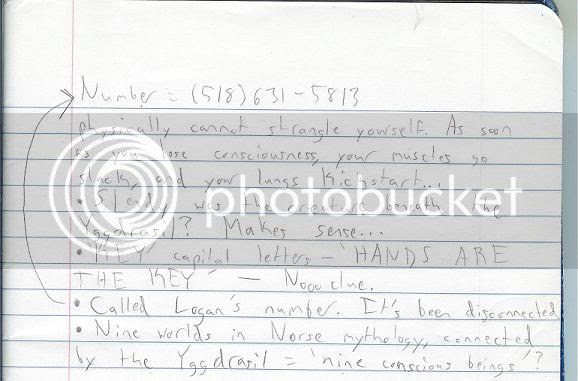 I guess I didn't expect the phone to work any more, but I wish I could've heard the messages everyone else did. Love seeing how everyone worked out the answers to the riddles, though, it's really awesome. X333

Also, Norse mythology and Slender Man? RANNNNDOM. Although I guess it does make sense, since he seems to have that weird obsession for trees. You'd think he'd go after them instead of creeperstalking little kids. xDDD
Posted by Z Wakey at 9:01 AM 6 comments:

RIGHT. I would've done this last night, but I didn't think I'd have so many problems with my camera. So I just said "screw this" and scanned everything up. But since I have a stupid curfew, I had to wait 'til this morning. Myyyyyyybad. xDDD 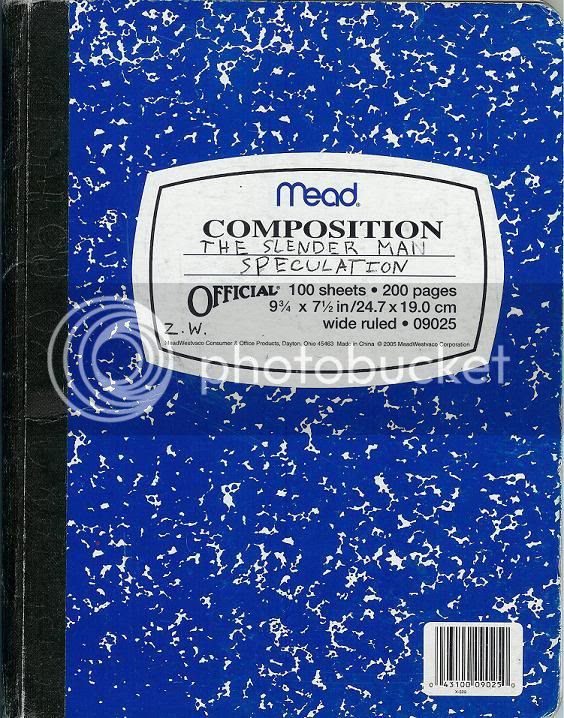 This is the notebook I'm using. X3 Lovely, huh? I like having stuff written down longhand, or I'd just type it all up as I go...plus this way I can check stuff out and take notes from my phone, when I have time~ 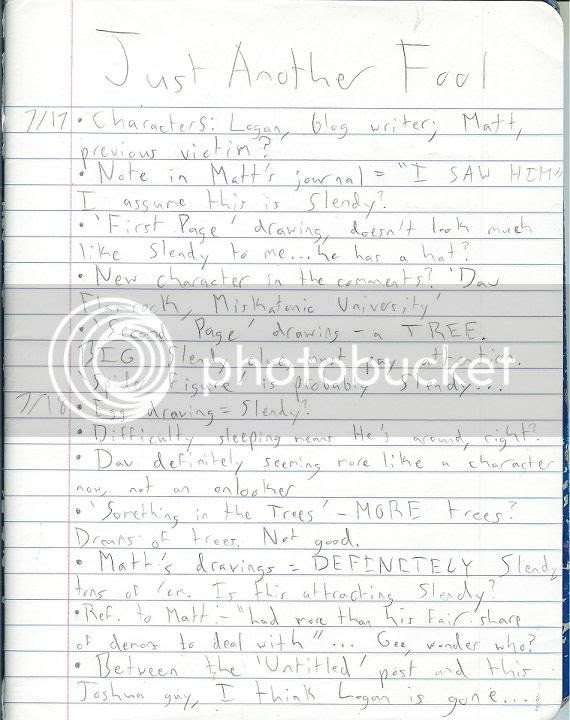 Everything I got from Friday night and last night. All of the July and August entries, and the first September entry. Guess most of it is pretty self-explanatory...

...now I feel scared, my house is surrounded by trees. xDDD Although Slendy supposedly goes after people who live in the middle of nowhere, so I should be safe~
Posted by Z Wakey at 8:21 AM No comments:

Z Wakey
Tampa, Florida, United States
I'm...weird. And I really like this whole Slender Man thing. And that's all you really need to know. 83